What is a Pantomime?

Pantomine is an old English theatre tradition based on the Italian tradition Commedia dell’Arte with characters similar to Harlequin and Pulcinella. Originally pantomimes were, as the name suggests, mimes. This is because when the  Commedia dell’Arte was introduced into Great Britain the actors did not speak English and so they had to mime and concentrate on music and singing. After all these years the actors now speak, but singing and music still play an important part.
There are always the ‘goodies’ who are very very good, the ‘baddies’ who are very very bad and comedy characters who usually involve the audience in some way or another.   A pantomime is the  representation  of a fairytale, a family event,  and it always has a happy ending.

In pantomime, the main male character – the hero – has always been  played by a woman because many years ago male actors were too rough to interpret a fine prince. One of the comedy characters is often an old woman, bossy but with a heart of gold, and this part is usually played by a man.

English people love tradition and every Christmas pantomimes are performed all over the country. Our aim is to show you this part of English life and before you see a performance you must know what is going to happen, because a pantomime is interactive; this means that the audience participates! There are typical phrases to shout  in every pantomime so it is very popular with children, of course. However  we can assure you that adults are just as willing to discard their typical English self control and join in the fun. 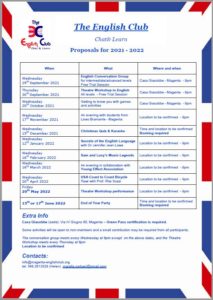