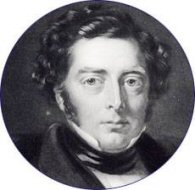 Robert Stephenson, an outstanding English civil engineer in the Victorian age, died in 1859 and is buried in Westminster Abbey, London.
Stephenson designed and built many long-span railroad bridges such as the Britannia Bridge over the Menai Staits in North Wales. He also designed a six-arch iron bridge over the River Tyne, using James Nasmyth’s newly invented steam hammer to drive the bridge’s foundations.
He worked on several projects together with his father George, but he is famous above all as the inventor of the first steam engine known as ‘The Rocket Locomotive’.

In 1829 trials were held by the Liverpool and Manchester Railway Company to find the best locomotive engine for a railway line that was being built to serve these two English cities.
Thanks to its innovative structure the boiler generated more power (steam), and The Rocket was able to go faster than its rival and secure its place in history.
It is the most famous example of an evolving design of locomotives and became the template for most steam engines in the following 150 years.
The locomotive was preserved and is now on display in the Science Museum in London.