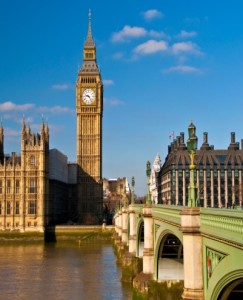 Listen to the sound of the Bell !

Where is it? in London! Right!

What is it? a clock tower! Wrong!

Big Ben doesn’t have a clapper. He is struck by a hammer from the outside. There are also four smaller bells which play the “Westminster Chimes,” which comes from the aria ‘I Know that My Redeemer Liveth’ in Handel’s “Messiah.”

Why is it called Big Ben?

Nobody knows the exact origin but probably the bell was named after Sir Benjamin Hall, who supervised the installation. His name is actually inscribed on the bell itself.

How tall is the tower?

The Big Ben tower is 315 feet high—making it the third tallest free standing clock tower in the world and it holds the largest four-faced chiming clock. The clock tower is actually tilted. Due to some tunnel excavation nearby, the tower now leans slightly towards the northwest by 8.66 inches. The leaning tower of London!

Has it ever been wrong?

In 1949, a flock of birds constantly pecking on the minute hand made it slow down by 4.5 minutes.

This is the inscription on the clock face. It means:

Yes, Queen Victoria! One of the most famous British women in history.